I was born on February 23, 1954 just outside Kadena Air Base.  My family had been Catholic from even before World War II, so Sunday Mass was de rigueur.  Our Priest was American and while unwaveringly strict about tenets, couldn’t have been kinder to me if I’d been his own.  “Before God,” he was wont to say, “Americans and Okinawans are equal,” which gave Church kind of a family atmosphere.  At the time, Okinawa had something of a caste system.  At the top were the US military personnel, followed by English speaking Filipinos come to Okinawa to work for military, then came the mainland Japanese, with Okinawans at the bottom.

In these my younger days, Father was an Okinawan police officer.  Of course numerous incidents and accidents involved US soldiers then too, but Father would often say:  “If there’s a house on fire with people still inside, or you see an injured victim trapped in his car by some accident, it’s the US soldiers passing by who stop to help, whether they’re on duty or not.  These actions reflect the spirit and self-sacrifice of true Christianity.”

The family sent me to Kyushu to a Catholic junior high, then high school.  This was because too many of Okinawa’s teachers in this era devoted less to teaching than to their anti-military fervor and protests, which only worsened the rift dividing Okinawa’s level of education from Japan’s.  My junior high school principal was an American and a Catholic monk:  strict but learned, and well acquainted with Japanese literature.

If I have failed to be as imbued in anti-US rant or ideology as my fellow Okinawans, this is first due to my experiences while growing up, but also to what I learned in writing my college thesis:  the significant material and human contributions made under the US Government rule to the establishment and enhancement of medicine and care in Okinawa.  The result was a medical care system light years ahead of the system in Japan.

In 1955, the III Marine Division repositioned to Okinawa from mainland Japan.  This necessitated establishing a new base because by then, all facilities built by the Imperial Forces for WWII had long since been confiscated by the Occupation troops.  In the urban centers at the southern reaches of Okinawa Island, the US offers of leasing fees and payment systems gave birth to a vehement opposition over prices.

Yet by the same token, communities of northern Okinawa, notably Henoko and Kin, organized a concentrated movement to attract the Division to their areas.  Okinawan public opinion was clearly split.  Yet, reports to the public by a local Third Estate hostile to the United States covered only the statements of some southern Okinawans, whose efforts were then called, the “Islandwide Struggle.”

In 1959, the US military and Okinawans reached agreement.  Okinawans declared themselves satisfied and accepted a US promise to pay six times the initial leasing offer; the Marines have been stationed in Okinawa ever since.  Just recently, the US military and Ministry of Defense attempted to return 120 hectares of Camp Hansen land to its registered owner, Nago City.  Strong opposition from the Mayor and the City Assembly forced cancellation of the plan to reduce the base holdings.

Land prices have continued to rise since 1959.  By the time of the 1972 Reversion to Japan, land prices were nearly sixfold what they were in 1959.  Ownership of lands used for US bases is a profitable business, annual ROI returns on current rates averages 4%.

In November, 2011, Okinawa Prefecture sponsored a seminar in Shanghai for potential Chinese investors interested in buying such lands.  The numerous potential buyers from China are being handled by local real estate agents who offer registered owners significant prices.

Japanese industry, including the notable example of Panasonic, has sought to establish factories in Okinawa only to find land prices too high and the work ethic in Okinawa, lacking.  Firms are often eventually unable to establish footholds or even retreat after a short period.

For 27 years from April 1, 1945 to May 15, 1972, the US Government administered Okinawa.  Specifically, for the seven years from the US landings on April 1, 1945, to April 28, 1952 when the San Francisco Peace Treaty came into effect, Okinawa was under direct US military Occupation.  For the next 20 years until May 15, 1972, while Japanese sovereignty lay dormant, the Ryukyu Islands were governed by Civil Administrators under the US Military.

In this period, universal suffrage helped establish self-governance in the form of the Government of the Ryukyu Islands (GRI), a Judiciary, and a single house Legislature.  At Reversion, the GRI was absorbed into the birth of the Okinawa Prefectural Government.

It is the caveat of many modern commentators to dismiss the entirety of the US Administration period as Okinawa’s “Dark Ages.”  Yet then and still for many, this was a time of eye-opening new ideas, new opportunities.  Okinawans still call those years, “Amerika-yu,” or the “American days.”  The expression rings positive:  times were good.  The United States brought prosperity, democracy, civil rights, hygiene, higher and better shared universal education, along with a host of other contributions such as basic infrastructure, substantially raising Okinawa’s level in all these venues.

Okinawa’s prewar population peaked at 597,902 in 1933, four years before the start of Japan’s involvement in WWII.  Average life expectancy was a mere 47 years.  The soils of our islands are relatively infertile and farming was rife with inefficiencies.  Aggravated by poor hygiene, residents regularly suffered malaria, tuberculosis, and other infectious diseases.  Another problem was the Japan enforcement of the values of male-dominance; women’s rights were blatantly ignored in prewar Okinawa.

These were just some of the conditions defining daily Okinawan life then.  In search of something better, multitudes emigrated to Manchuria, Hawaii and other Pacific islands, or to South America.

Conditions worsened during the war years, then during the Battle of Okinawa.

Hygiene became almost non-existent, and of course, food was scarce.

The end of war also brought the return of many who had emigrated to Manchuria or the Pacific islands, nearly doubling the population.  The US Military Government moves to ensure stable conditions included better health care and relief supplies; these also supported a population spurt.  Despite the heavy losses to war, within four years of its end, the population had ballooned to 698,827, nearly one hundred thousand more than the prewar peak.

As it still is today, the prewar economy of Okinawa Prefecture was dependent upon subsidies from the Japanese government.  But at the end of the war, Japan was in no position to subsidize distant Okinawa.  However, the U.S. Government and its people helped, providing more than one billion dollars in aid.  The U.S. provided roads, dams, hospitals, nursing schools, even establishing the University of the Ryukyus.

Put this into perspective:  the US Government achieved in just 27 years, more than Japan had in the preceding 70.

In then revolutionary moves, the U.S. helped develop the potential of Okinawa’s women.  The military government sponsored local elections for which the women of Okinawa enjoyed suffrage six months earlier than did the women of mainland Japan.  Special Proclamation No. 16 brought a halt to human trafficking, widespread under the prior rule.  The military government even provided scholarships to women with potential, supporting studies at university or even abroad.

In short, under the U.S. administration, nearly all Okinawans came to enjoy not only greater freedom but also greater prosperity.  Healthcare drastically improved, so much so that by the time of Okinawa’s Reversion to Japan, several local endemic diseases had been eradicated.  Not least, fundamental frameworks for the system of law, business practices, and local governance were well in place.  In one of the best examples of the US influence on earlier systems, the US Military Government moved to change banks.  Calling the legacy banking systems of Okinawa “medieval,” the US Government capped the privileged pay scales of bank officers, instituting a new code of community contribution as the rationale for banks, and required audits mirroring those of US banking.  As such, the postwar era banks provided meaningful support to Okinawa’s economic growth.

By the time of Reversion, Okinawa’s population had grown to 950,000 with average life expectancy at 79 years, the highest in Japan at the time.

Many were the Americans who helped.  Notable among them was a nurse named

Juanita Watterworth, known today as the “Mother of Okinawan Nursing.”  Although she too had lost her husband during the Pacific War, she worked for Okinawa for ten and a half years of the post-war reconstruction period.  She instilled pride.  She often said, “There are no boundaries in nursing. There is no winner in war, so of course there is no loser.”  She said her mission was to “to raise the level of Okinawan nursing to international standards.”  Her efforts and programs helped the level of Okinawan nursing skills and status to be among the best in Japan.  Even now, nurses and public health caregivers from developing countries come to Okinawa for their training.

2012 is the 40th anniversary of Okinawa’s Reversion to Japan, a historically unprecedented act in which land seized in war was peaceably returned by a generous nation:  the United States.  Its generosity is reflected not only by Reversion, but also in the contributions the United States made, and continues to make, to Okinawa.

On a different scale, the US military presence in Okinawa has mitigated the political uncertainties in the Far East, not just on issues of sovereignty but on Okinawa’s very political fate.  Even on the eve of Okinawa’s Reversion to Japan, Chinese Taiwan claimed ownership and sought return of Okinawa to their control, while today, mainland China has resurrected ancient claims to Okinawa, protesting the US ceding control to Japan.

It is unfortunate that some writers, unfamiliar with facts that are salient but fail to justify the prevailing preoccupation with criticism, stoop irresponsible reiteration of negative hyperbole without fair or proper analysis.  Especially given the passage of time, we of Okinawa should more accurately and dispassionately evaluate the postwar era, giving fair play to the achievements of the US.  Hyperbole, such as the description, “the vast military installations whose presence harasses Okinawans to this day, with no end in sight,” are unhelpful in understanding the past or the present, but can help obscure the future.

Ryunosuke Megumi, a native of Okinawa, is a Gest Professor at Takushoku University, and the author of numerous works including, Daremo Kakenakatta Okinawa no Shinjitsu (The Truth about Okinawa No One Could Write About). 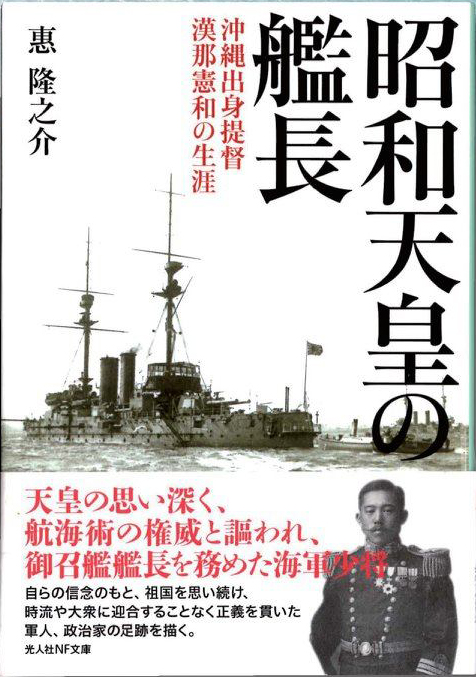 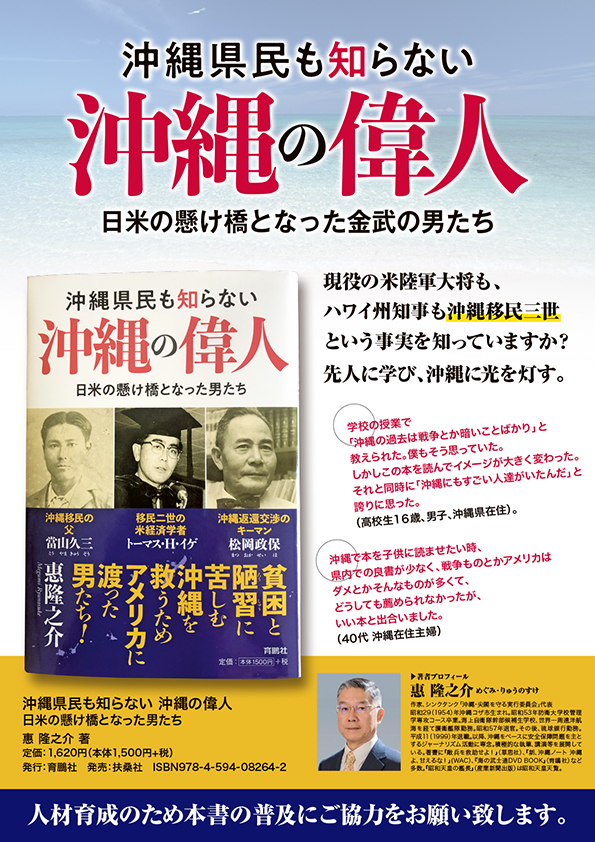 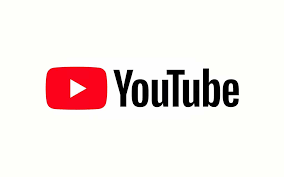